Why Doesn’t My Loyal Spouse Just “Move On” and “Get Over It”? 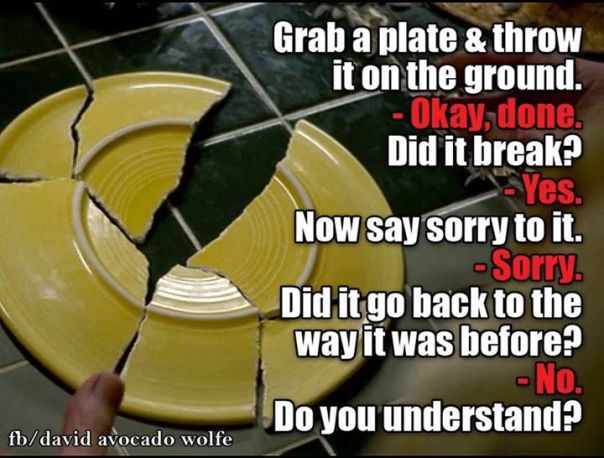 When a Disloyal Spouse ends the affair and decides to reconcile, they often can not understand why their Loyal Spouse keeps bringing it up, asking question, and not moving on.  Why not just “get over it” and let the marriage be the way it was?

This image helps explain why.  The Disloyal Spouse knew what was going on the whole time; they saw the bigger picture.  But the bigger picture was hidden from the Loyal Spouse, (the Disloyal lied about who they were with, what they were doing, where they were, when they’d be at certain locations, etc.) — or the Loyal Spouse just didn’t want to admit the truth to them self and frankly denied what was obvious!  Either way this is NEW INFO to them.

The Disloyal Spouse did the damage: they “threw the plate on the ground.”  The marriage is the plate.  Now, here at Affaircare, we recognize that some marriages/plates had chips and even some serious cracks–but the plate was not smashed.  After the affair, the marriage/plate is broken into a zillion pieces.  And even though Loyal Spouses do want to hear the regret for breaking the plate (how sorry you are, how you’ll never do it again, that you regret what you did and what you said)–that IN NO WAY repairs the plate! The plate is still completely shattered!

Taking the time to glue the pieces back together is what repairs the plate, and even then it’s not “like it was.”  It may be weaker.  It may have scars. Maybe you can’t use the plate in the microwave because it’s not as tough as it used to be…  But yelling because the Loyal Spouse is not “getting over” the plate being shattered, or telling the Loyal Spouse to just “move on” because the plate is fine, still in no way repairs the plate!

In order to repair the plate (the marriage), the person who broke it (the Disloyal Spouse) has to DO SOMETHING in addition to saying they regret breaking it.  They have to do some actions, and the #1 action is to stop throwing the plate on the ground (end the affair)!

If you have questions, leave them in the comments and we’d be happy to explain more

Post navigation← Why Doesn’t My Loyal Spouse “Get Over It and Move On?”Triggers and shortcomings →